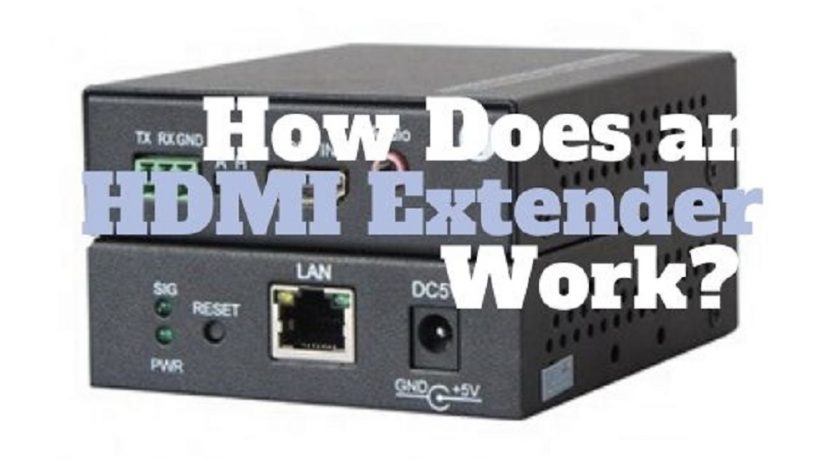 Despite the versatility of an HDMI connection, carrying high quality video and audio through a single, there’s a drawback.

HDMI cables show their prowess only up to a certain length.

Exceed that length and the AV quality begins to degrade.

But then there’s a solution at hand to prevent this problem. It comes in the form of an HDMI extender.

As its name suggests, an HDMI extender helps you an extend an HDMI cable connection without the said accompanying quality loss.

The Way to Extend an HDMI Connection

The way to extend your HDMI connection beyond a certain length is through an HDMI extender.

The HDMI extender device comes in a pair – a transmitter and a receiver.

Both these devices have to be connected to an AC power supply. So make sure you have extra power outlets at your disposal.

To connect the HDMI extender transmitter and receiver, you do not need lengthy HDMI cable. If you’re going to extend your HDMI connection by 100 feet, you would not need a 100-feet cable.

Instead, you would need an Ethernet (RJ 45) cable.

If you’re not familiar with the cable, it’s the one you use to connect your computer to a modem/router to connect to the Internet. Very much like a telephone cable, but slightly larger.

Cat stands for the Ethernet cable category. The higher the category of a cable, the higher the bandwith and data transfer speed it supports.

How the HDMI Extender Works

Connect the HDMI output from a video source (cable set-top box, Blu-ray player, Android TV box or game console to the HDMI input of the transmitter portion of the HDMI extender.

Insert an Ethernet Cable of your choice, preferably Cat5e/6/7 to the Ethernet cable slot of the transmitter.

Plug an HDMI cable into the HDMI out slot of the receiver. Connect the other end of the of the cable to an HDTV or computer monitor.

With the above connection, you would be able to enjoy an extended HDMI connection without any video quality loss.

Watch the video below to get a clearer picture of how an HDMI extender works.