The Matroska (MKV) Multimedia Container : Is It Better than MP4? 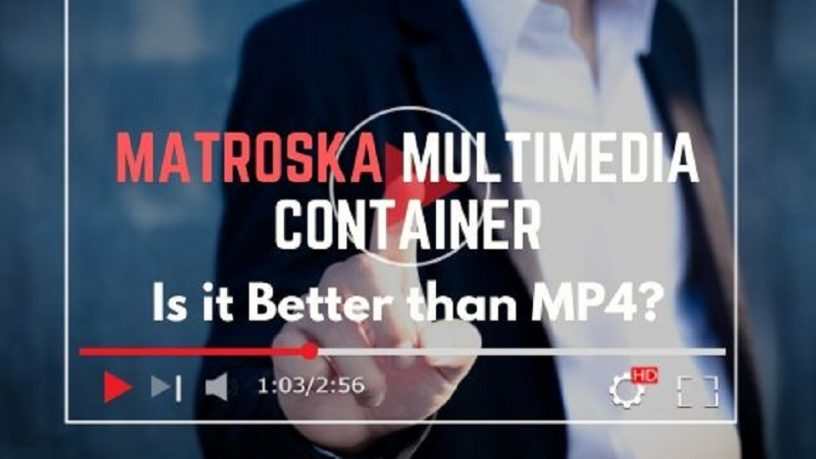 One of the well-known free, open source video formats out there is WebM.

Another thing worth noting is the Matroska (free for personal use) multimedia container format.

Why is it Called Matroska?

Isn’t Matroska a strange-sounding name for a video container? Yes, it’s not from the English language, but Russian.

It’s name after the Matryoshka doll, a nested set of wooden dolls with decreasing sizes which could be put into one another.

The Matroska multimedia container format can hold a linitless number of videos, audio, images, subtitle tracks, covert art and text descriptions – all in a single file.

A Matroska video file extension is .mkv. The video may be with or without sound.

Among the standout features of the Matroska multimedia container format are:

Matroska is a cross-platform container format. You can stream a Matroska file over the Internet or through your home network.

You can also play it through software and hardware media players.

The first-choice media player to play back an .mkv file is the VLC Media Player, which can play almost any video format thrown at it.

We tested an MKV file with embedded subtitles and it played well.

If you don’t want to install a media player in your computer, you don’t have to if you’re on Windows 10. You should be able to play black an MKV file over the built-in Windows Media Player.

We tested an MKV file with the Windows Media Player that came with Windows 10. Playback was possible.

But then the embedded subtitles didn’t appear during playback as it did with the VLC Media Player.

IIf you can’t play your MKV file, then you would have to install a codec pack like the Combined Community Codec Pack  (CCCP) or the latest K-Lite Codec Pack to make Windows Media Player MKV-compatible.

The Android OS, being open source, doesn’t discriminate against video formats. One of the best ways to play back your MKV files to your television set is through an Android Box.

Just copy your MKV files to a pen drive or an external hard isk and plug it into the USB port of the Android Box for playback through a host of media player apps to your television,

It would be hard put to find a DVD player that plays back an MKV file.

If you want to play back an MKV file over a DVD player, the best bet would be to convert it to a DVD-compliant format, preferably MPEG-2.

But that doesn’t mean the end of the road. Recently, we came across a Blu-ray player LG -HD860 which mentions MKV playback.

Still, we would recommend an Android box if you wish to play back an MKV file over your television set.

Some of these so-called portable MKV DVD players are advertised over eBay, mostly from China.

You could do well to ignore them and play your MKV files over your tablet instead.

MKV is finding increasing support in the video market these days. Apart from hardware media players incorporating the format into the devices, some computer programs are dedicated to it.

The Divx Plus program, for instance uses MKV as its default container format.

What we are talking about is MKV and MP4 as video containers, not video files with the extension .mkv and ,mp4.

A video container makes it flexible for you to choose the type of video and audio quality you need to produce a video.

Really, no one video container is better than the other. The final video quality will depend on the video and audio codecs you use.

If you use low-quality codecs to save space and encoding time, then you’ll get a lower quality video, no matter whether you use an MKV or MP4 container.

It’s the choice of codecs that matter. For example, both MKV and MP4 can support the H264 codec which produces superior quality video. But of course the MP4 container is more popular than MKV, especially on mobile devices.

However, if you’re a regular user of the VLC media player, whether over your computer or mobile device, then you could opt for Matroska Multimedia Container.

It supports a larger range of codecs as its frame work is based on the super flexible EBML (Extensible Binary Meta Language). How to Play