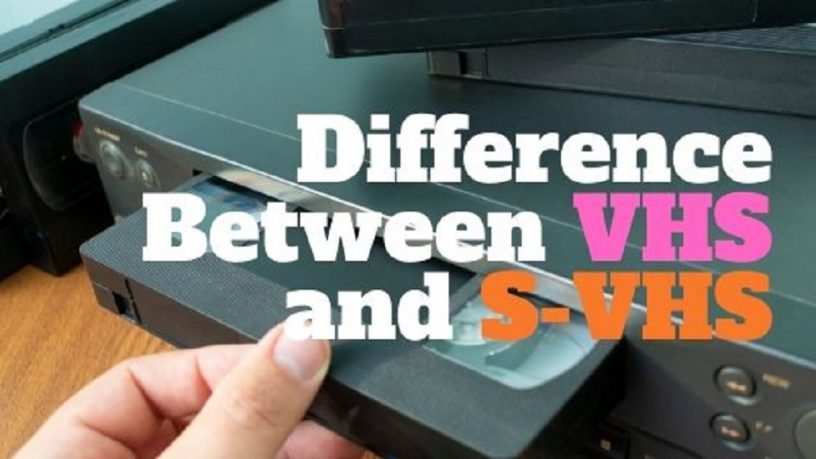 If you’re not from the VHS age, you may be wondering what is the difference between VHS and S-VHS, especially if you’ve come across these two tape format from the days of your forefathers.

Well, let’s the check out both the formats.

It was a format developed by JVC (Japan Victor Company). It was introduced to the home entertainment market from 1976 (Japan) to 1977 (USA).

When it was first introduced it was called Vertical Helical Scan (VHS), the technology behind it. It was renamed Video Home System much later.

By the 1980s it had caught on with the rest of the world.

It was introduced in 1987 by JVC. It was meant to be an improvement over VHS.

Similarities Between VHS and S-VHS

Before we look at the difference between VHS and S-VHS, let’s look at their similarities.

The two tape formats look very much the same physically.

They have the same tape width – 0.5 inch. The tape shells are also share the same physical dimensions.

Difference Between VHS and S-VHS

Here are among the differences between the two tape formats:

The main difference is in their video resolutions.

VHS has a horizontal resolution of 240 lines.

S-VHS has a horizontal resolution of 400 lines.

Although both the formats support Hi-Fi audio, VHS’ colour is only of the composite quality. In fact, VHS’ quality could be said to be lower than the quality of TV broadcast during the analog TV days.

S-VHS, on the other hand, has superior video quality. This is achieved by splitting the luminance and the chrominance (Y/C) signals.

With VHS, both these signals are mixed.

S-VHS players can support the playback of VHS tapes. However, picture quality will not improve just because a VHS tape is played on a S-VHS deck.

Also, S-VHS video players come with S-Video output, for the separation of the luminance and chrominance signals as mentioned above.

Although composite output could be used, superior picture quality is achieved by using the S-Video connection.

Also the price of a S-VHS tape is more expensive than a VHS tape.

For additional information on the difference between VHS and S-VHS please watch the video below.