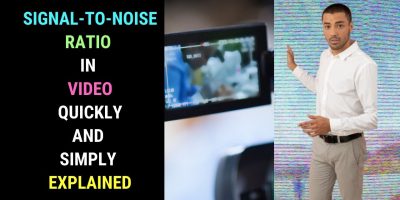 S-Video, also known as Super-Video or Separate Video or Y/C Video made its appearance with the emergence of S-VHS (Super-VHS) video cassette recorders.

S-Video is a video interface standard that carries a separated luma and chroma (luminance and chrominance). In other words, the brightness and color components or (Y/C) video signals.

The signals are carried in two separate cables. However, these cables aren’t visible if you look at an S-Video connector cable. They are actually wrapped and sealed into a single cable.

Video signal is transmitted through a 4-pin mini-DIN connector.

Composite video (usually with a yellow cable connector) carries the luminance and chrominance of a video signal in a single cable.

However, if you have a choice between working with composite video and S-Video, you should opt for the latter.

Also, note that an S-Video connection has the capability of supporting a standard-definition signal of up to 480i.

S-Video was introduced by JVC in the 1990s with the aim of improving the video quality available with VHS players.  Unfortunately, S-Video video cassette recorders didn’t catch on in the early days. Cost was the culprit.

These days S-Video is a standard feature in most televisions whether analog or digital.

S-Video may not have much to shout in these days of HDMI reign. However, if you’re working with analog video, then it’s worth considering using
it for superior video quality. Especially if you have an older DVD player or television set.

An S-Video cable doesn’t carry audio. It transmits only video, unlike HDMI which transmits video and audio.

For audio, you would still have to use composite (RCA) cable connectors (Red/White).

Watch this quick video for a quicker understanding of how audio works in an S-Video connection.

Apart from superior video image quality, S-Video eliminates dot crawl. Dot crawl happens when an interference (disturbance) happens between the light and color segments of a video signal. The result is a checkerboard pattern on the edges of the image. Dot crawl is common in composite video terrestrial broadcast.

With S-Video, this problem is minimized and the result is a sharper video image.

Make sure the pins are aligned with the openings in the female connector before applying force to plug it in.

In case you bend the pins you could straighten them with long-nosed pliers but be careful. Applying too much pressure may break the pins.

There are two common types of S-Video connectors – the 4-pin and the 7-pin. You should be careful when plugging in an S-Video connector as you run the risk of damaging the pins if you push the connector hard. Make sure the pins are aligned with the openings in the female connector before applying force to plug it in.

In case you bend the pins you could straighten them with long-nosed pliers but be careful. Applying too much pressure may break the pins.

Do you have S-VHS VCRs or camcorders that you wish to connect to your HDTV which comes with component input?

If so, an S-Video to component converter will do the job for you.

The S-Video to component converter takes an S-Video signal and converts it into an interlaced component (YCbCr ) video signal at a resolution of 480i or 576i.

That’s why it’s also called an RGB with a sync-on-green (SOG) adapter.

You can also input composite video with it.

Check out this S-Video to component converter.

If you have an old VGA monitor, do not throw it away. You could connect your VHS or DVD player to it through an S-Video to VGA converter.

An S-Video to VGA converter comes with RCA and S-Video input ports and a VGA output port.

The most important thing you want to do when buying an S-Video to VGA converter is to check whether it supports your player TV system – PAL, NTSC, or SECAM.

Thankfully, most of these players do. In fact, they’ll auto-detect the type of S-Video signal you send to them.

This S-Video to VGA converter comes with a composite video, S-Video and VGA inputs, and VGA output.

The following features are supported:

The unit comes with S-Video and VGA cables as well.

Check out the SLLEA S-Video to VGA converter.