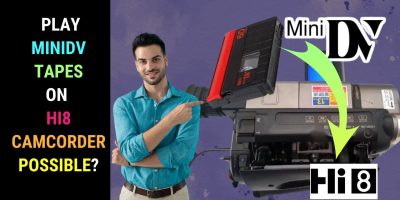 It is a variant of the DV format developed by Sony. Introduced in 1996, many regard it as the pro version of DV.

DVCAM was meant as a competitor to DVCPRO, introduced by Panasonic a year before in 1995.

DVCAM’s popularity could be attributed to the availability of low-cost Non-Linear Editing (NLE) systems that it is compatible with.

Before the emergence of DVCAM, U-matic and Betacam SP ruled the professional video market.

DVCAm tapes come in two sizes – standard and mini. Both have a tape width of 1/4 inch or 6.35 mm. This is the standard width for all other types of DV tapes.

With the standard DVCAM tape, you can record up to 184 minutes.

With the mini tape (the size of mini-DV), up to 40 minutes of video can be recorded. A longer recording time is available as explained below.

Tape speed and track pitch are increased, however, to provide better quality video.

Drum speed, however, is constant for all DV formats.

Track pitch for DVCAM is at 15 microns compared to 10 microns for other DV tapes.

DVCAM uses the same type of tape as mini-DV. In other words, it uses an ‘advanced’ Metal Evaporated (ME) tape.

Tape durability is also enhanced through the use of the Diamond-Like Carbon (DLC) layer. This provides additional protection to the tape surface. It makes the tape fit for long editing sessions.

There are IC Cassette Memory and Master Tapes, each suited for different applications.

Also, DVCAM tapes come with the ‘audio-locking’ feature. This prevents the audio from falling out of sync with the recorded video.

DVCAM tapes can be played not only on DVCAM players but also on DVCPRO players.

This would include DVCAM and generally DV tapes in SP mode. DV tapes don’t need an adapter for DVCAM VTR playback. Also, no menu adjustment is needed.

DV tapes can be used as a source for editing material.

The DVCAM camcorder and VTR are also capable of recording up to 276 minutes via its standard size tape. 60 minutes is possible on a mini-size tape.

This would be done on a DV25 tape.

DVCAM may have fallen out of popularity owing to the arrival of HD video formats.

If you have DVCAM tapes and wish to play them back, you may want to get hold of a DVCAM player. You may also need a unit to convert DVCAM tapes to digital.

The following models are available for purchase online.

If you’re looking for a portable DVCAM playback unit, you may want to take a look at the Sony DSR-V10 DVCAM Video Cassette Recorder (VCR).