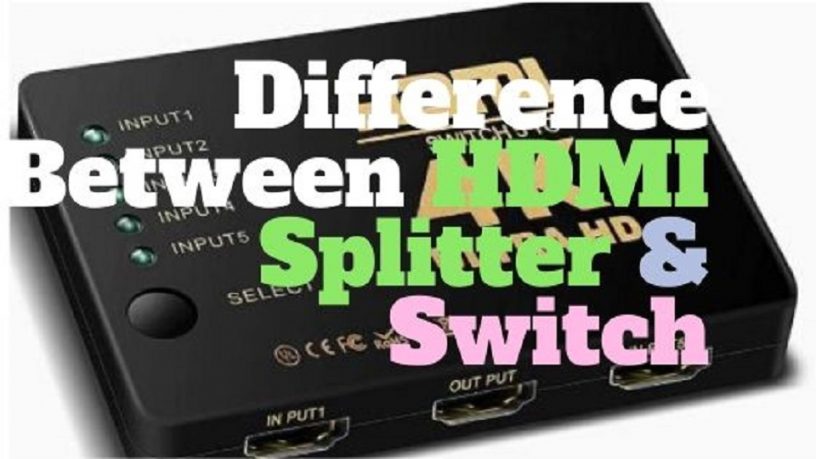 In the world of high definition (HD) video, there’s no escaping an HDMI connection.

This is one AV connector, that’s here to stay, offering high quality audio and video through a single cable.

This is when an HDMI splitter and switch come in handy.

With these devices you get to maximise your enjoyment of HDMI-enabled device without having to fork out a fortune.

The thing is, there’s much confusion between an HDMI splitter and switch.

An HDMI splitter enables a single HDMI video source to be sent to multiple HDTVs or computer monitors.

You may not need an HDMI splitter if you’re a home user. Chances are you’ll have not more than one television set in your living room. So, there’s no reason for you to send video from a single HDMI source to multiple monitor.

For your information an HDMI splitter would also come in handy to solve an HDCP error when you connect an HDMI device to your HDTV.

But say you want to send video to another HDTV in an adjacent room, then an HDMI splitter would come in handy.

HDMI splitters work in the following manner – there’s one HDMI video source in. The HDMI splitter separates it into two or more video streams, through its output ports.

HDMI splitters are commony used in TV shops where there’s a need to display the same video on many different TV sets.

This happens when a video playing from a Blu-ray play needs to be sent to multiple HDTV sets.

An HDMI switch does the reverse of what an HDMI splitter does.

Here you have two or more HDMI inputs with a single HDMI output.

All-in-One Solution for Your HDMI-Enabled Devices

So, instead of swapping cables every now and then, you can plug in all your HDMI-based devices into an HDMI switch and connect the output to your empty HDMI slot.

Then you select (switch to) which device signal should be sent to your TV with the HDMI switcher.

Here’a a quick HDMI switch shopping guide to ensure you get the bang for your buck.

Get an HDMI switch with as many HDMI inputs as possible. More than what you’ll use now. You won’t know which HDMI-enabled device you’ll use in the future.

The more ports, the better. Never mind the extra cost.

Get the Correct HDMI Version

The HDMI version that your HDMI switch supports is equally important.

Since your devices may be HDMI 1.4, sufficient to support Full HD, 1080p video, you may want to settle for an switch which supports that HDMI version.

But you must also look into the future.. Though you may not be using a 4K TV at the moment, it pays to get an HDMI switch which supports HDMI 2.0.

It may be a little costly, but it ensures you don’t have to dump your HDMI switch when HDMI 2.0 becomes the in-thing.

Also an HDMI 2.0 switch is backward compatible. It supports older HDMI versions. So, you’ve nothing to lose.

If you’re still thinking whether you should buy an HDMI swutch, think again. Apart from the hassle of swapping cables, you save wear and tear on your TV HDMI ports through constant cable plugging and unplugging.