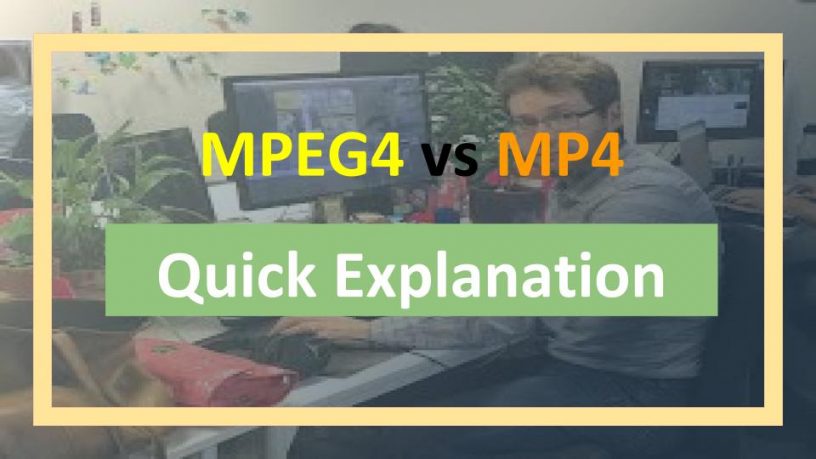 At first glance it seems so, but it’s not. Hence the MPEG4 vs MP4 explanation below.

MPEG-4 is a Video Codec

MPEG-4 is a video codec.

A codec is the short form for COmpression and DECompression.

When you have a video with a large file size you may use the MPEG-4 codec to compress it to a smaller size.

In this way, you can enable playback of it in supported devices, apart from saving on storage space.

MPEG-4 consists of different parts, each supporting a different codec. Here are some popular examples.

MPEG-4 part 2 consists of the XviD codec for video.

Initially MPEG-4 was aimed at improving the compression ratio of MPEG-1 and MPEG-2.

However, it was later expanded to cover a broader use. Today, MPEG-4 technology is relevant to the computer, televison and telecommunications industries.

In the television industry it is used in movies, broadcasting and consumer electronics.

In the telecommunications industry, it is used in ISDN, DSL and switched-circuit network.

Before MPEG-4 came into being, these industries were separated, each with their own standards.

So, you won’t be surprised to find MPEG-4 used in:

MPEG-4 audio is widely used in text to speech (TTS)applications. It transforms text content into a series of phonetic symbols.

MP4 is a Container Format

MP4, on the other hand doesn’t compress a video file. It’s just a storage or container format.

A video container is where you can store various multimedia files that enhances the experience of viewing a video.

So, within  MP4 you can store audio, video, subtitles and even images.

All this can be managed in a single file.

MPEG4 is for Compression.

MP4 is for Storage (Container).

How Do I Play MPEG-4 Files?

You can use a universal media player like VLC Media Player which can play any video format thrown at it.

If you want to play MPEG-1 or MPEG-2 files on iPhone, you would have to convert them to MPEG-4 first.

How Do I Convert to MPEG-4?

To understand MPEG4 vs MP4 better please read the introductory articles below.