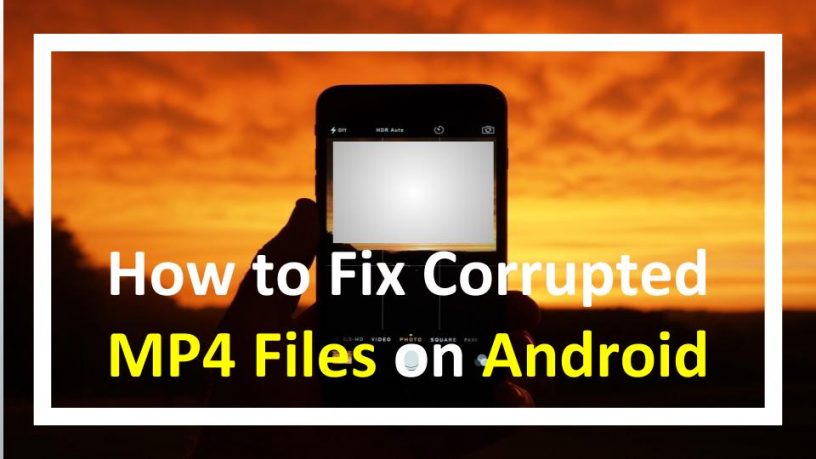 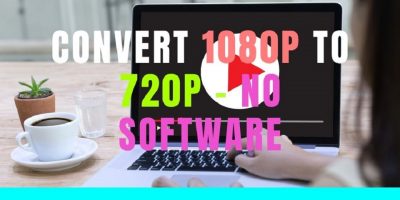 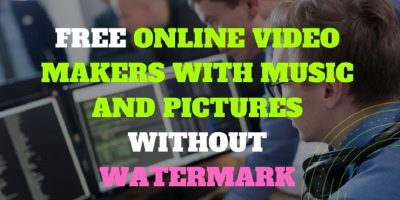 Free Online Video Makers With Music and Pictures without Watermark 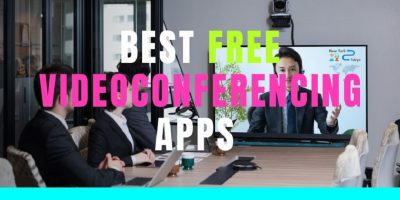 Working from Home? Here are the Best Free Videoconferencing Desktop and Mobile Apps to Meet Your Team Online

This article will discuss ways on how to fix corrupted MP4 files on Android.

These days more often than not, videos are shot on Android smartphones and tablets.

These devices  can be conveniently carried around in your pocket or bag. They also shoot in HD quality, dispensing the need for a dedicated camcorder to capture  precious moments with friends and family.

Need to give your video the polish it deserves? Almost all video editing programs accept the MP4 format.

Also when when there’s an unsupported video codec on Android error on your smartphone or tablet, converting the unspported file to MP4 will almost always solve the problem.

Despite its popularity MP4 has a hidden problem. If you aren’t careful, when shooting your video, you may end up with a corrupted MP4 on Android.

If your Android MP4 gets damaged or corrupted you can’t play it back in your device or any other programs, whether hardware or software. That means you have no video to share.

This is indeed frustrating if you have captured a precious moment. Before you fret and fuss and decide to delete the recorded, unplayable video file, hold on a second.

Can You Fix Your Corrupted MP4 Files on Android?

Your damaged or corrupted Android video file can be repaired. Is there really MP4 repair software for Android?

Yes, there’s a MP4 repair solution for corrupted or damaged video files. In other words video repair in Android devices is possible.

Causes of Corrupted MP4 on Android

Knowing the causes of a broken MP4 on your Android smartphone or device will help you prevent a similar occurrence in future.

Your Mobile Device Switches Off While Shooting

This could happen for two reasons. First, it’s because of low battery power.

The second reason could be due to your Android Smartphone overheating. As a safety precaution, to prevent damage to your phone, it automatically turns off.

When your phone is suddenly turned off, the system is unable to save the header information of the video you were recording.  As a result, your Android device is unable to play the video.

As is usually the case, when you manually stop recording a video, the header information is generated and saved in the system.

It is this header information that makes possible the playback of the video.

So, when the phone is switched off before a video recording is manually stopped, the header couldn’t be created and registered in the video file.

.When you try playing the video, you get an error message.  This is a sign of MP4 header corruption.

To prevent this from happening, keep your phone battery power at a reasonable level when shooting an important video.

To prevent overheating, turn off other apps when shooting and also exit your video camera app when you’re not shooting to keep your phone temperature at a reasonable level.

Camera Apps are subject to instability. For no reason they could act up and stop working altogether.

When this happens in the midst of a video recording, you’ll end up with a corrupted MP4 file because the header doesn’t contain the complete video information required to play it back.

To avoid this, close all other apps when recording video with your Android smartphone or tablet.

Recording video when your storage space is low puts you at the risk of risk of ending up with a corrupted MP4 file.

The system stops recording abruptly when storage space hits a critical level. When this happens, the header information can’t be generated and the video becomes unplayable.

Most of us keep recording videos freely without worrying about the amount of storage space they take up. Smartphones these days could record in Full HD mode which eats up gigabytes of space within a short period of time.  So, always keep an eye on your available storage space every now and then.

Before shooting an important event, free up a few gigabytes of space by backing up the files to an external storage device or to your computer hard disk.

The VLC Media Player requires no introduction to anyone who uses or produces audio or video.

It’s said that VLC Media Player can play any video or audio file format thrown at it.

This is true to a certain extent. It’s known for its capability to play partially downloaded video files and other types of problematic video files not playable elsewhere.

Reason?  As has been explained, the header information required to play an MP4 file is absent in a corrupted MP4 file.

Alright, let’s get down to the business of how to repair a video file on Android.

MP4Fix is a video repair app for Android MP4.  It uses one of your ‘correct’ videos to repair your broken or corrupted video online.

The Preview is free and you get to watch your repaired video.

If that’s okay with you, you don’t have to pay the $6 charge to use the premium features which allows you to download and share your repaired video.

If your video doesn’t successfully get repaired the first time, don’t give up. Try repairing it with ‘another’ correct video. 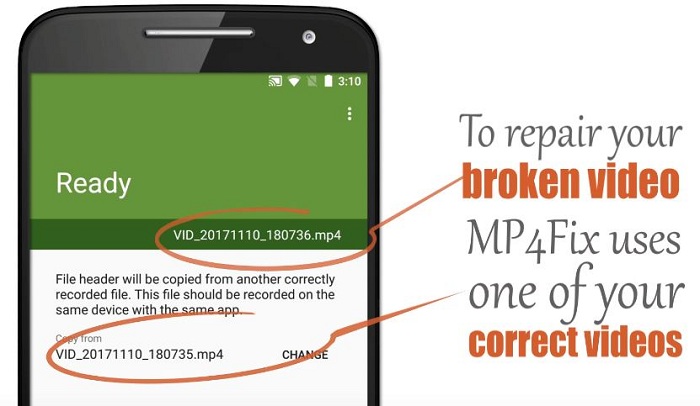 One standout advantage of the MP4Fix Video Repair Tool can even repair your video of a big file size even if it runs into gigabytes.

Also, this Android video repair tool allows you to use your phone for other tasks while your video is being repaired. 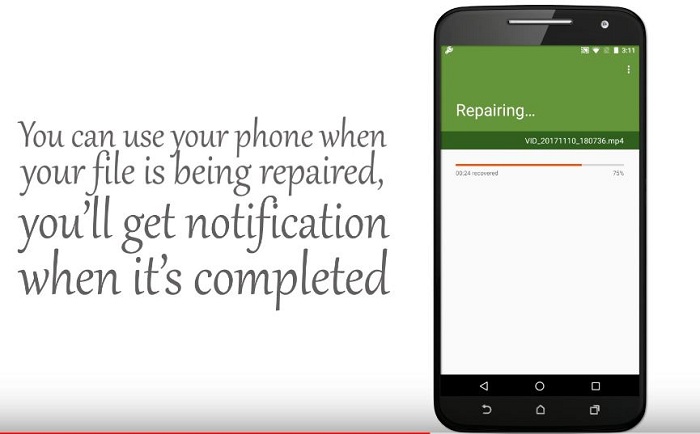 Once your file is repaired you’ll get a notification – all data recovered.

If you are satisfied with the quality of your repaired video, then you may proceed to purchase the premium features.

This is a one-time purchase which allows you to repair any number of corrupted or damaged videos in future.

This is unlike the so-called browser-based video repair online services where you’re charged by the minute for every video clip you repair.

This App developer doesn’t encourage you to pay for premium features unless you’re totally satisfied with the quality of the repaired video.

Codecs supported at the moment are H264, AAC and MPEG 4-SP. The developer admits that the repairing of MPEG 4-SP is a slow process.

More codecs will be introduced in future as and when the need arises for this online video repair service.

You Need a ‘Correct’ Video File

To help repair your corrupted Android MP4 file, you would need a ‘clean’ video file. It must be recorded with the same settings as the damaged MP4 file.

This would be the MP4 file that would be used as reference for the repair work.

So make sure this reference file in your Android device is not corrupted or damaged.

Worry not about this because this video repair app for Android would go into auto mode to pick up a suitable reference file from your system.

Let it be known that the app doesn’t repair video files from non-Android sources like video downloads from the Internet or those recorded with DSLR cameras.

If your video was recorded with the H264/AAC codecs then this app is a safe bet for repairing your corrupted MP4 files.

MP4Fix Video Repair Tool is available for download on Play Store. With it you get to preview your repaired video for free. But an in-app purchase is required if you desire to download and share the repaired video.

This MP4 repair software is called HD Video Repair Utility.  It works for both the Windows and Mac platforms offered by grauonline.de

After downloading the software and installing it, you would require:

Prepare the two files mentioned above  before launching the MP4 repair software,

It’s advisable to rename them in such a way that you don’t get them mixed up. So, if your broken file is elephant.mp4 you could rename it to damagedelephant.mp4 and your good file is tiger.mp4, rename it to goodtiger.mp4.

Your next step will be to load the two files into the program.

The corrupted file will not be previewed in the preview window.

The next step will be to be input your corrupted MP4 Android video file – brelephant.mp4

You do this on the top half of the interface.

Select the output folder and give the soon-to-be-generated repaired file a name.

Then click on Choose reference movie to choose the perfectly recorded Android video file – in our case goodtiger.mp4.

Then hit the Scan button. 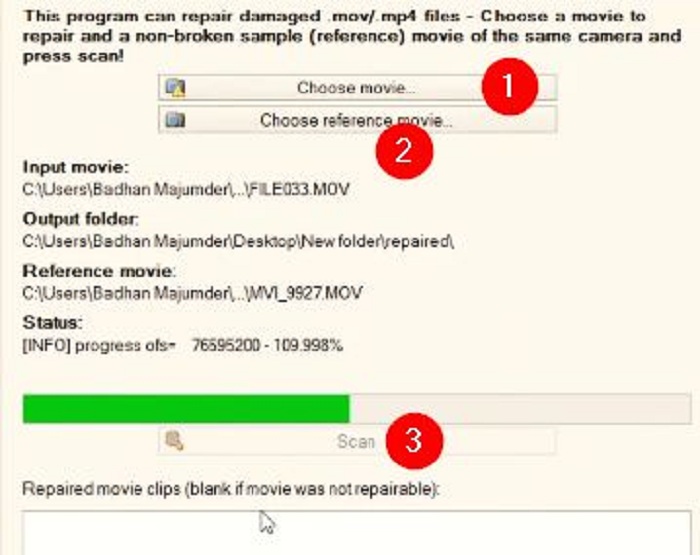 If repair is not successful the window will be blank.

The next thing will be to navigate to the output folder to retrieve your file.

If you’re using the Free Version, only 50% of your file will be repaired. You’ll need to purchase the Premium version to get your corrupted Android video fully repaired.

If you’ve happy with the sample if the repaired file you may proceed to purchase the single-user license for the program.

For 29 Euro the license will entitle you to a maximum of 5 video repairs.

For 99 Euros you’ll be entitled to an unlimited number of video repairs.

This will cover you against future damaged corrupted MP4 files from, your Android and other devices.

Check out this Android Video Repair at Grauonline.de

Now that you’ve learned about how to fix corrupted MP4 files on Android, go ahead and give it a shot.

Free Online Video Makers With Music and Pictures without Watermark

Working from Home? Here are the Best Free Videoconferencing Desktop and Mobile Apps to Meet Your Team Online