How Does a DVR Work? 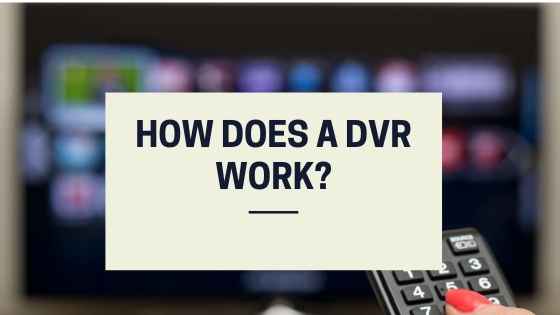 DVR works like a VCR (Video Cassette Recorder – remember the VHS tape days?). The main difference is that the DVR records digital video.

These days when we talk about DVR, we usually associate them with cable TV.

But then DVD recorders could also be regarded as DVRs – those that come with hard disk storage.

So, the main element of a DVR is the video recorded is stored in a hard disk instead of a tape or a disc.

You connect a DVR to your TV very much like how you’d connect a VCR or a DVD player to a TV.

The most common connection is via RCA cables.

How is a TV Signal Carried from Your DVR to TV?

TV broadcast signal enters the DVR via an antenna, cable or satellite.

This signal is converted to to a digital format, via the built-in encoder, namely, MPEG-2 .

The digital signal sent to two different channels – one to the DVR in a digital format.

The other signal is converted back to analog and sent to the television set.

Some DVRs allows for the recording of two TV shows while you’re watching another previously recorded show. Whatever the case, the recording principle is the same.

What are the Main Components of a DVR?

Generally, the DVR comes with an operating system which is built into the hard disk which provides storage space for recorded shows.

Unlike a VCR, you don’t have to wait until you finish recording a show to watch it.

You can start watching programs that you started recording ten or twenty minutes ago and is still recording. This is the digital world where you don’t have to rewind tapes.

There’s also the ability to pause a live show on TV and watch it minutes later. This would be useful, if you have to be away for some minutes to answer a call or go to the toilet.

Some DVRs have the capability of recording multiple number of shows at the same time while you’re watching another show live.

You can also schedule a recording ahead of time, especially if you’ll be away from home when your favourite show plays.

To enjoy these benefits, you don’t need an Internet connection or WiFi.

In the pre-DVR days, this would be impossible.

How Does the DVR Pause Feature Work?

When you hit the pause button, the image on the television freezes.

The truth is as the show goes on, the DVR keeps the recording of a show in the past few hours.

When you hit the play button again, the show picks up from the point you paused and grabs the video from the live TV recording buffer.

In short, this is how a DVR works – you’re able to pause, rewind and fast-forward a TV show.