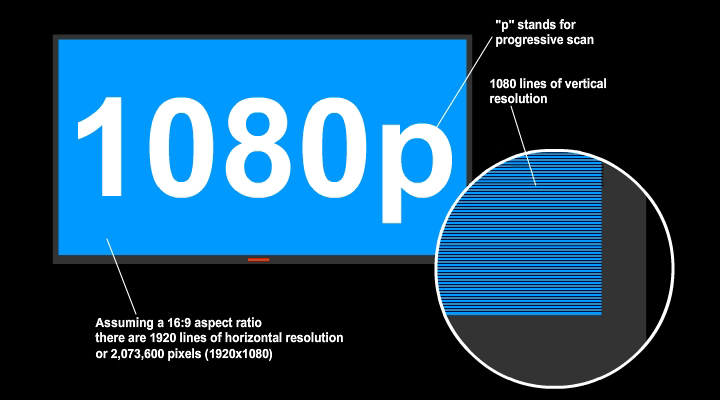 The difference between 1080i and 1080p is in the scan type each uses. 1080i uses interlaced scanning to display pictures while 1080p uses progressive scanning.

You may have heard some television sets being called HD TV and some Full HD TV.

In other words they are called 1080i and 1080p respectively.

The i stands for interlaced and p stands for progressive. Both these types of scanning are explained below.

Although current models are mostly Full HD TV sets, you’ll need to understand the difference between the two especially if you’re thinking about buying an older used set.

This is the kind of  scanning that takes place in progressive mode.

The scanning of the lines in each frame takes place from line A to line B. It jumps from A to B straight. Therefore is called progressive.

Compare this with the interlaced mode, as explained below.

Interlaced scanning mode, the scanning of the lines in each frame takes place from A1 jumping over to B1 then to A2 before moving to B1 and then jumping to B2. In other words, the lines are scanned alternately.

In progressive video every single line is a sequence.

In interlaced video alternate lines (A1 + A2)  form a sequence.

1080p is frame-based video. In other words, it is referred to in frames per second.

A field contains half the lines of a frame.

The interlacing takes place so fast that it’s hardly noticeable to the human eye.

What does this mean in terms of video quality?

Generally you’ll not see much difference between the both. Both have a resolution of 1920 x 1080 pixels  (2.1 Megapixels)

However, 1080i will show its shortcomings when it comes to full motion video,

1080i show jitters when subjects in the video move diagonally or vertically.

So, if you’re watching fast moving action you would have a better viewing experience over 1080p.

Also, the bigger your TV screen size the more you’ll see the difference between 1080i and 1080p but this is just a moot point these days as there are hardly any 1080i TV sold these days.

In these days of Full HD video, 1080i may seem a little outdated. Still 1080i is being employed for TV broadcas especially among some terrestrial stations while other stations broadcast in 720p.

720p on the other hand has 720 lines on each frame which is slighter higher than 1080i’s 540 lines. But to the naked eye, the quality difference is negligible.